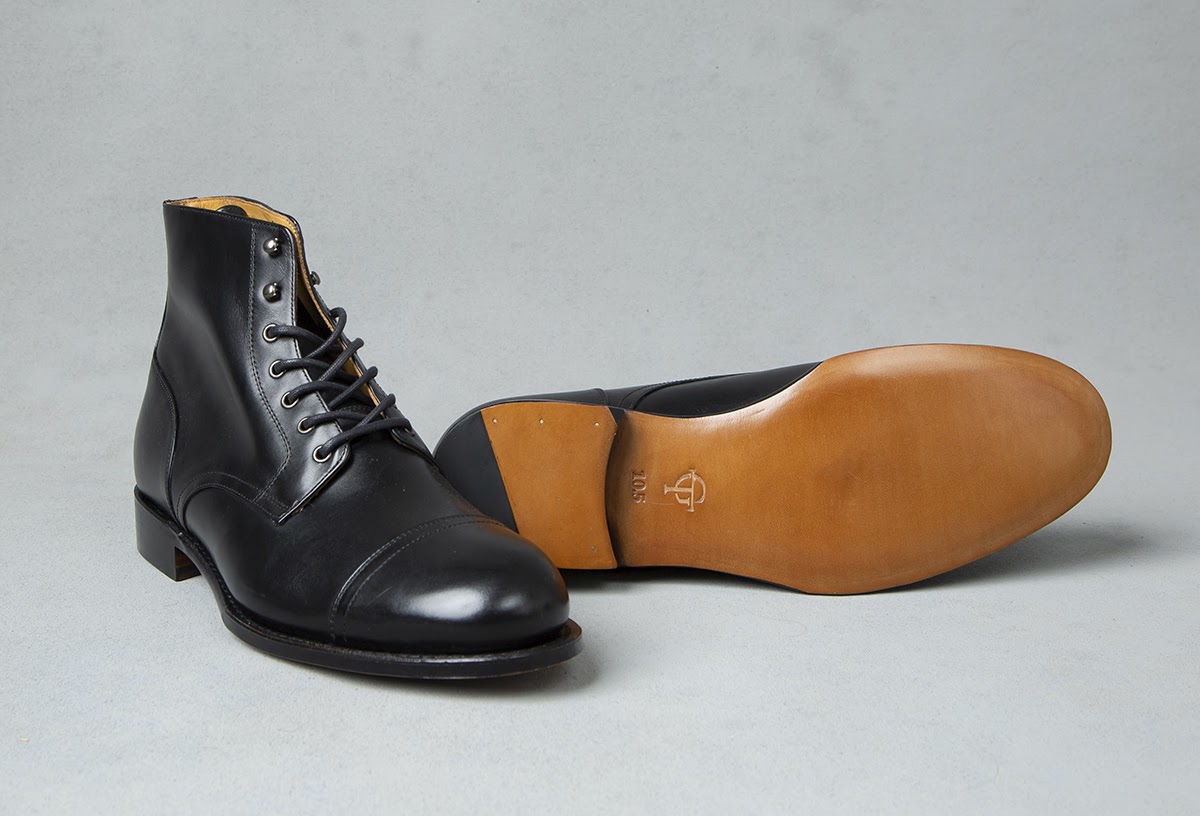 The debate about what style of boot to include in our inaugural collection of men's footwear was a quick one; or more to the point, we didn't have a debate at all, for the simple reason that the service boot was writ large - rugged, unassuming, durable. It was obvious. The service boot. Characterised by its ankle length, backstay, counter, vamp and quarter - the service boot offers a rugged charm and adds a tablespoon of vigour to any man's wardrobe. It doesn't mind an honest day's labour and can be called upon to complete a more formal look, such is its versatility.

We knew they were a very popular boot in North America and our own survey data indicated promise in Australia. However, the popular choice was clearly the Chelsea Boot, the boot with the elastic sides; put on the map by Reginald Murray Williams, turned rural chic by politicians and fashionistas, and now likely unaffordable to the rouse-about who gave it its country 'cred'. Nevertheless, it's an important boot to Australians and one we should be proud of. Though if you forced my hand and told me I had to pick a boot style that has had the greatest (historical) impact on Australia, it would undoubtedly be the service boot.

Taking Inspiration from our past When you start a venture like this one, you need to find people in your life - past and present - who remind you why it's 4am and you're writing a blog post. Anyone with children or a mortgage has motivation enough, but you also need someone who has lived (often several lives), someone who truely inspires you.

Len Hall is one of those people in my life. He was a veteran of Gallipoli (surviving the charge of the Battle of the Nek). He took part in the legendary charge by the Light Horse to capture Beersheba in 1917 and then rode with Lawrence of Arabia to liberate Damascus in 1918. He was also a humble, unassuming man who worked hard and never made a fuss. I had the pleasure to meet him more than once in my childhood and when I had to tackle the development of the service boot, he was the first person who came to mind. Of course, he survived the war in his issued service boots.

George Lambert, The charge of the 3rd Light Horse Brigade at The Nek, 7 August 1915 The bodies of most of the 234 Australians killed at The Nek were not buried until after the war. Courtesy @ AWM ART07965

In the process of creating our service boot line, I reached out to the Australian War Memorial. Their researchers, and in particular curator Jane Peak, provided us with many useful sources and detailed information about the service boots employed predominately in the two world wars. The service boot experienced a number of iterations (known as patterns) as troops fought in different campaigns under different conditions, requiring different modifications.

These changes were usually retrospective, meaning Anzacs (Australia New Zealand Army Corp) often entered campaigns in boots not fit-for-purpose. Not all iterations are listed below, but the major ones are included and offers a useful insight into the role the humble service boot has played in our history. Along the way, you may even pick up some of the similarities in patterns that we incorporated into our mens shoe range.

At the outbreak of war in 1914, the first contingent of the Australian Imperial Forces (A.I.F) was issued with service boots based on a 1912 pattern: a plain toe ankle boot in brown leather with the standard backstay and counter found on many service boots today. The 1912 service boots featured a basic nail and stitch construction, little or no lining, and a single (but thick-ish) composite leather sole with a stacked leather heel. The sole was fitted with rows of iron hob nails and staples designed to improve grip, reduce wear and protect the outsole. The 1912 Service Boots as worn by Pompey Elliot at the Gallipoli landing of 25 April 1915. For his troubles, he reiceved a bullet to the foot. Image @ Australia War Memorial (AWM)

On April 25, 1915, Australian and Commonwealth Forces landed at Gallipoli in order to open up the Dardanelles and ultimately take Constantinople. The Gallipoli peninsula was unforgiving with its many gravelly hillocks and ravines. It was also hot, with temperatures reaching 40 degrees Celsius soon after landing.

The Anzacs needed a boot that was light-weight and mobile. The 1912 Service Boot turned out to be an excellent bit of kit: the leather upper was often made from Kangaroo, making it tough but supple; the single leather composite sole was light-weight and flexible. Infact, it was one of the few pieces of uniform that was not discarded or otherwise modified as the Diggers became acclimatised and dress standards relaxed. The 1912 Service Boots were light-weight and good in hot climates, perfect for the Anzacs in the opening months of the Gallipoli campaign. Photo @ AWM

The 1912 model served the Anzacs exceedingly well right through to August 1915. Then temperatures began to drop. From October to December the Peninsula suffered one of its coldest winters on record. Blizzards, snow and sleet covered the lines and the soldiers' equipment, modified or otherwise, struggled under these conditions. The mood was best summed up by A.I.F soldier Granville Ryrie in a letter to his wife:

I can hardly write my hands are so cold. I have never felt anything like last week, it blew a blizzard and rained and snowed, the ground was covered to about four inches and then it froze and blew a hurricane, the trenches were over your boots in slush except when it was all ice, a lot of men have their feet frostbitten and some will lose their toes.

The cold cut straight through the single leather sole. The 1912 model, so suitable for the initial landing, was not an appropriate winter fighting boot, and many men suffered because of it. For those who remained and survived, an upgraded model would not be available until after their evacuation from the Peninsula.

Pre-orders for service boots are now available. Part III will be published shortly. Subscribe and be notified when they are live!